An X-ray film of the neck, chest, and abdomen is usually taken to evaluate ingested metallic foreign bodies (MFBs). Using a hand-held metal detector (HHMD) to diagnose and locate MFBs was evaluated in this study. Children with a swallowed MFB were examined with X-rays and HHMDs in a prospective study of 53 consecutive patients. The swallowed MFB was confirmed radiographically in 47 of the 53 children. The most common object swallowed was coins. Only 47% of other MFBs were detected and located by the HHMD. The results were not false positives. HHMDs are effective tools for screening suspected coins that have been ingested. They are inexpensive, radiation-free, and easy to use. They cannot detect very small MFBs.

In a child with no symptoms, a hand-held metal detector can detect a foreign body that is innocuous with no need for radiological confirmation.

Prospective case series of children presenting to the emergency department with suspected metallic foreign body ingestion. We enrolled 38 children and used the HHMD to detect the presence and location of the MFB. Standard radiographic studies were compared with the results.

There were 37 MFBs among the 38 foreign bodies ingested. HHMD positively identified 33 of the 37 MFBs analyzed, while radiography identified four that were missed by HHMD. According to HHMD, radiographic locations correlated 100% with HHMD locations. In the study, 33 true positives, 0 false positives, 3 false negatives, and 1 true negative were detected. Based on this, we found a sensitivity of 89% (95% confidence interval, 75%–96%) and a specificity of 100% (95% confidence interval, 2.5%–100%). 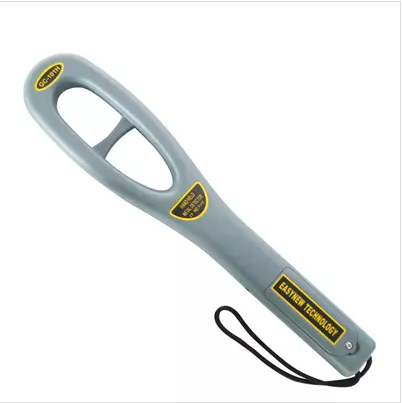 HHMD is accurate in identifying and locating metallic foreign bodies. In order to expedite the process of obtaining Otolaryngology consultation and potentially reduce waiting times for operating rooms and discharge, we propose an emergency room foreign body protocol that uses HHMD as an early screening tool in triage. Where outside films are already performed, the use of HHMD may eliminate the need for repeat radiographs and minimize the radiation exposure to children.

It is important to note that a negative HHMD screening does not negate the need for a standard radiograph to avoid missing MFBs since the sensitivity is not 100%. Coins are the most common products ingested with MFB, so HHMD is best suited for the detection of coins. However, due to the amount of metal, the method may not be as sensitive for other metallic objects.

186 of the child's parents (81%) reported the child swallowing an MFB. 183 children were found with radio-opaque MFBs in the metal detector, while 181 were found with radio-opaque MFBs on radiographs. Only four out of the remaining 45 (19%) confirmed the presence of an MFB with both a metal detector and radiography when swallowing was suspected and not definite.

A metal detector was used in this study to detect swallowed MFBs, and a high detection rate was observed. MFBs like aluminum that is not radio-opaque can also be detected. When there is a history of swallowing, then the likelihood of finding MFBs is higher.